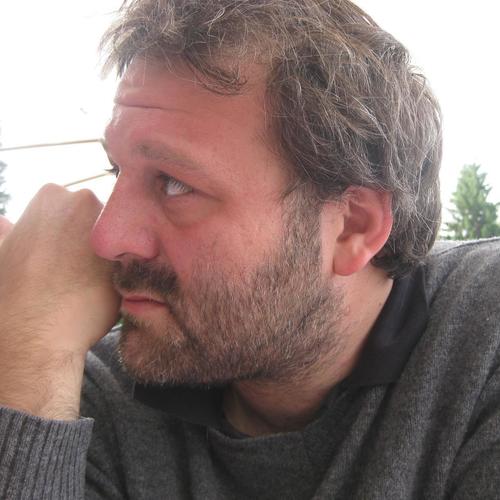 The Italian language award of the 2018 edition of Carlo Annoni Playwriting Prize was won by Sergio Casesi, award-winning dramatist and musician in Milan, with his play Zeus in Texas.

Sergio Casesi has been first Trumpet at the Orchestra Regionale Lombarda, I Pomeriggi Musicali in Milan since 1999.

His numerous awards include the first prize in the competition “Anime Nude” at the Teatro dell’Orologio in 2012, with the staging of the one-act play Traditori, the “Premio per la nuova drammaturgia” of the Teatro la Pergola in Florence in 2015, and the important Cendic Prize in 2017 with #AnAmericanDream.

He worked as a dramaturgy tutor for the Biennale di Venezia, for three years, as part of Biennale College.

The diversity’s issue is a central theme of our time. Diversity is declined in different ways and for different worlds, but it always concerns the relationship between the individual and society, between the individual and the masses. The care of diversity in love and in general in the private sphere, sexuality but also politics, or the ideal, spiritual and creative sphere, is maybe the most urgent because crucial for the daily lives of millions of people. We often see, in the Western world, legislation chasing society and in countries like Hungary, Poland or Russia (we see) a return to the dogma of hate and violence. In the world there are powers that play with people’s lives and it is the duty of all free people, including writers and artists, to tell, denounce and fight for the right to live unhomologated, unconstrained and untrammelled. The battle for civil rights is then one of the battles for human freedom and, unlike older battles that were won but then lost along the way, we hope it can contribute to the progress of all humanity in a lasting and certain way.

The Carlo Annoni Playwriting Prize is necessary for all of this, as are the thoughts and words of all of those who are fighting and fought. Thanks to the Carlo Annoni Prize, which has become an indispensable international event, more and more people get in touch with the themes of diversity and are forced to come to terms with themselves, their habits, their fears and their truths. Young people and families, audience and artists, opinion and politics. I strongly believe in creativity as a fundamental element for the affirmation of rights.

An anecdote… i found out that Carlo Annoni was originally from Agliate, a small Town in Brianza on the banks of the Lambro. Small town that i’m fonded with because my partner’s family still leaves there and, coincidentally, near the Annoni’s home. So, by chance, there was a trace in my experience with that of Carlo, at the center the wonderful romanesque Church of Agliate. I organised with the members of the Prize a concert for Carlo Annoni in the Basilica itself, with musician friends bonded in some way to that extraordinary place. It was a beautiful, rare and valuable moment.

The Carlo Annoni Prize has meant a lot to me. I received the evaluation of great professionals, of great artists. This is important when you give your maximum, when you try to write and live in the same way.

I was lucky to work as a dramaturgy tutor at the Biennale di Venezia for three years. And I met many young people from many parts of the world. I learned a lot from many of them. But I see two very common evils in the approach to writing that I, at least I hope, believe I have always rejected. First, the fear of conflict. Dramaturgy is conflict. It is not to be avoided, on the contrary. It is necessary to always investigate it in depth, without succumbing to fear. To understand that imagined conflict what it means for us and why. Secondly, and maybe even worse, I have noticed the tendency of many to refer to pre-existing models, even fundamental ones. But this needs to be clarified. Never write in the way of Titius or Caius. Never ever want to write someone else’s text. If we are lucky, we will be original, otherwise the internalised models will still be visible in the filigree. But I often see a really thorny flattening, humiliating i would say. To write, you have to use your own blood, your own smile and your own pain. Your own experiences and dreams. You have to overcome the fear of living. You have to challenge yourself, knowing you can fail. Talking to scriptwriters or authors, but also to music composers, I have found myself discussing choices based on other works, other writings, other people’s ideas. No, this is wrong. Also ethically. It is vulgar and sterile. We may fail, make mistakes, not succeed. But it will be us. And perhaps, with confidence and strength, we will be able to write something valuable instead, as long as we use what we are and what we have in our veins. And not other suggestions and literary infatuations.

I don’t know what to expect from the future. It seems to me that theatre, like music and artistic knowledge in general, matters little. We are in a period of the technical society in which economy is the moral horizon to which every man must tend. It seems that the theatre, that for millennia has been the place of secular and civil reflection, no longer has an authentic role. And if it is true that the narcissism of many authors and artists is guilty, at this point I do not feel like blaming us workers in the performing arts. It seems that society, and in particular politics and the media, also because of increasing problems in a context that is indeed only economic, do not care about the future of culture or even the future of actors, set designers, directors, skilled workers and musicians. I feel exiled from the perimeter of what is important, of what is vital. Yet I have always written, and played my instrument in the orchestra, believing I was doing something important, indispensable, for everyone. I don’t know if I am wrong now or was wrong before. But I don’t know what will happen in the future. I have no elements to understand if we are in a phase that will be resolved or if the fate of artists is marked, at least for many years. Theatre is not entertainment, which is important and that we miss, and it is a job for many professionals. But theatre is a manifestation of collective consciousness, it is a shared and free moment. And I do not want to imagine a society in which technology can dispose of everyone’s life without a place where this same life can be staged to search for its meaning, if there ever was any, and anyway its continuous recomposition over the time.