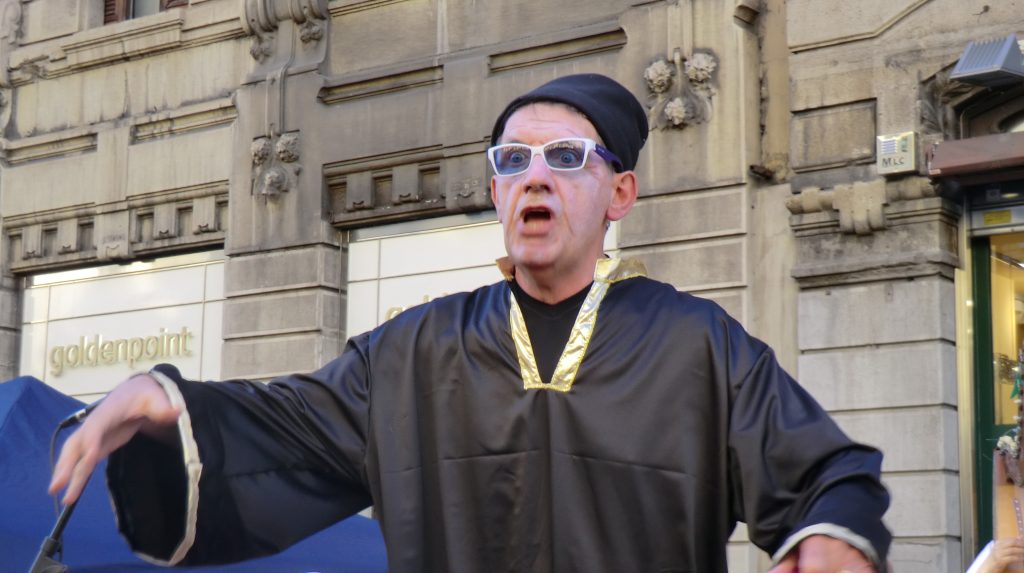 Theatre connoisseur, amateur director, male nurse, reflexology therapist, painter and 360 degree creative, Carlo Annoni was born in Carate Brianza on 16th July 1955.
He has moved to the 5th dimension on 11th April 2017, where he is currently stage reading the plays you deserve to hear, without mincing his words, as he would do nevertheless.

He used to love this world, the theatre, people, his friends and myself (Corrado Radovan Spanger) with every bone in his body.
I wanted to preserve this enormous love from dissolving, so I dedicated a prize to him and to those who – like him- are capable of such love.
Theatre was one of his favourite creative outlets, so I chose to award new theatre writings with this prize.
London was the place we chose to be united in a civil partnership (18th September 2010), then to marry (5th June 2015). Our union was lately recognised in Italy (8th November 2016). Carlo Annoni Playwriting Prize to promote LGBTQ topics is an act of love. As such, it will endeavour to give life to the words of the authors that will wish to participate.

A different…kind of friend (by Patrizia)

“Surely I am not a girl anymore, I have seen a few sunsets by now. Anyone who’s around my age knows that the farther you walk on your life path, the more you loose certainty and open up to doubts, despite what the logic would derive.
But then!!!  I still remember our teacher telling us- her students- that you should NEVER start a sentence with a ‘but then’. And this is my first certainty fading, as only a BUT is not enough in this circumstance, so I’ll definitely need a THEN too.
But then, well, some certainties are there and you’ll need to refer to them because they have turned into the fortified pillars of our existence.
I have always considered friendship as one of those certainties: a pristine feeling that can be as powerful as love itself when selfless. It’s emotional core is fuelled by daily emotional exchanges.
It’s possible to love unrequited, but friendship can’t exist without an emotional exchange.
This is the reason why we are meant to meet friends on earth, why a person ‘grows’, meets up, hugs or finds shelter in a friend for short or long period of time.
Instead Carlo Annoni was a different kind of friend to me, as well as dear.
That’s because I had never met Carlo in flesh and blood, but only after he had passed away.
His love for Corrado made us meet. I also believe he came to find me to help Corrado overcome the loss. Since then, my friendship with Corrado has changed and tightened.
I suddenly felt the need to learn more about Carlo, look him and his passions up on his and his friends’ Facebook pages. I checked him out through Corrado’s memories of him, I watched his acting videos, the photos of his most significant life moments, his wedding, his nights out on the dance floor, his ‘ turned around’ children.
I was profoundly moved by his professional ability to ‘turn children around’ in their mother’s wombs, so that they could start life in the right direction.
Such a profound and symbolic meaning.
And in the end we really met. One night  I felt his soft touch reaching to my shoulders, as if he had to check me out or make himself known.
A kiss on my forehead, but not even…a soft breeze and my certainty of his presence.
A friend who’s really different and special, that lives only in my heart thanks to Corrado that made us meet.“